Kaden Marble Run "Funnel" S from Oskar's Wooden Ark is a basic entry level set compatible with other Kaden Marble Runs of size S. The addition of the extra funnel pieces in this set make the ball run more interesting by giving it depth as the balls spin around and around on their way down to the next level. By placing the wooden blocks together in differing combinations, differing ball runs can be created. Kaden Marble Runs are made in Germany from steam treated beech wood - a process that increases stability and durability.

This video shows one example of how the four basic Kaden Marble Runs "S" can be used together:

Beautifully made. My 3 year old loves playing with it everyday!

Best purchase ever. My 3 to son loves it and he plays every night. It is very well made!

We absolutely love these sets! Making us all play as a family. Definitely want more!

The overall size, weight and quality of this item surpasses expectations. It is so beautiful and completely open ended. I can not wait to gift this and begin to play!

My son loved playinplaying these so much at school we had to buy some for home! The noise and feel is just so satisfying!!! 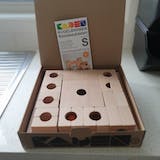 S
Sara
The most amazing ball runs - ever!

These ball runs are the most amazing thing my boys play with. They are 2 and 3 and love watching the balls go down over and over again