The Mader Roly Poly Rainbow Pear is a great gift for youngest. A classic pear shaped roly poly toy with brilliant rainbow colours. Your little one will have fun pushing this knock-over top in every direction and watch it stand straight back up, thanks to its clever weighted bottom. Its size makes it perfect for small hand to hold, shake and spin.

Colour: Each Mader Roly Poly Rainbow Pear comes in either Rainbow colours starting with red on the top and ending with purple on the bottom or the other way around.

Mader Kreiselmanufaktur was founded in 1991 by Klaus Mader, a very skilled carpenter with a love for handcrafted wooden toys. He has a small but mighty workshop found in the foothills of the Austrian Alps which hand makes not only traditional spinning tops but also skipping ropes, kaleidoscopes and yo-yos. Each spinning top is painstakingly made by hand, often by Klaus himself, out of locally sourced wood with some tops requiring up to 20 different stages such as wood turning, burning, embossing, carving, brushing, painting and varnishing. One can’t help but admire the attention to detail in every creation.

His toys are easily recognised as they all have a burned in stripe in the middle, beautifully chosen colours and unparalleled attention to detail. You can’t help but pick one up and give it a twirl then watch mesmerised as it spins and falls.

Been waiting to buy this for a while. Jumped on it as soon as it came back in stock for future baby (as we were planning on our second child). Super cute! Worth the wait! But do prefer the Rolly Polly with rattle inside for the fact it had a rattle. 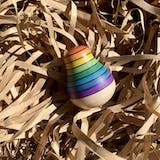 My 5mo goes absolutely crazy for this little pear. Was the first toy to encourage her to roll onto her front to go get it! It’s a great size for her little hands, and not too small for tasting. Perfect. 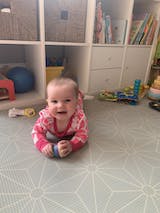 Good for little hands, my 18 monther loves it.

Love this bought for my 9mo and he thinks it's sooooo funny. perfect size for baby hands too.

Great toy for bub to grab while on tummy time. He loves it!

My 6 month old loved it from the moment we gave it to her, great fun when rolling / tummy time. Love that it is timeless too, when put on a hard surface the spinning is great.

Bought the roly poly to encourage my 6 month old to reach for things and improve mobility. It has been an absolute hit. She is enchanted with it and would be occupied for ages. Stunning quality!

This roly poly pear is super smooth and perfect for tiny hands to hold and grasp. At the moment she (and I) love to watch it wobble around on the floor and look at the stripes seem to change when it’s spun like a spinning top! Her laughs are infectious! Worth every cent!